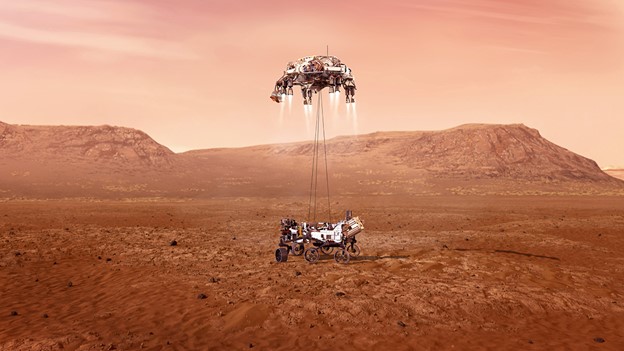 Winter brings long cold nights that are ideal for sky gazing. Unfortunately, Oregon is prone to clouds and rain during the winter months that frequently prevent sky gazing. So take advantage of every break in the weather to go outside and view the night sky.

The focus this month is on the planet Mars, which is the only planet in February that we can easily see in the evening sky (see images below from timeanddate.com).

To the naked eye, Mars appears as a bright red star and even through an amateur telescope details are often difficult to make out.

The most exciting aspect about Mars this month is the arrival of three spacecraft at the planet: NASA Perseverance, Emirates Mars Mission, and the China’s Tiawen-1. All three were launched last summer.

The Perseverance mission includes a lander and a rover. The goal of the mission is to seek signs of ancient life and collect samples of rock and regolith (broken rock and soil) for possible return to Earth by a follow-on mission.

The image below (from Nature Magazine) provides an overview of the Perseverance Rover. 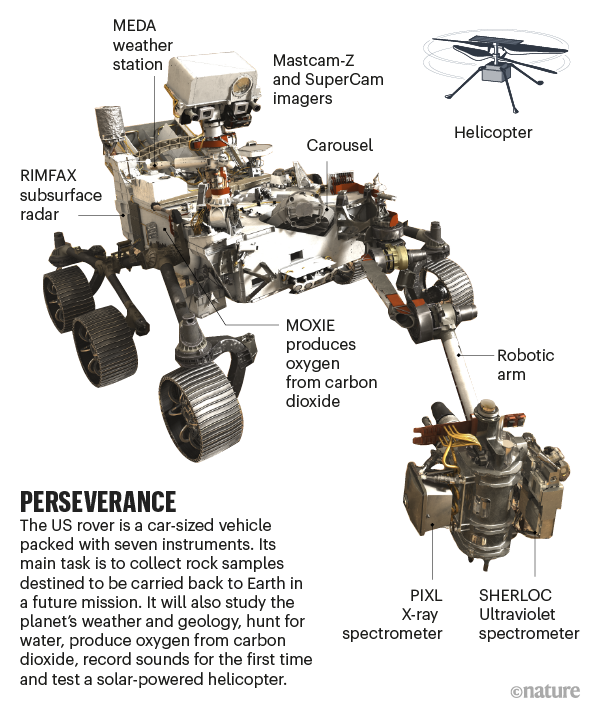 Perseverance also contains the Ingenuity Helicopter, which will be used to test the first powered flight on Mars.

Landing a spacecraft on Mars is extremely difficult, and NASA is the only space agency so far that has achieved this. The NASA diagram below shows the timeline for the Perseverance landing, which will be on February 18 at midday (west coast time). 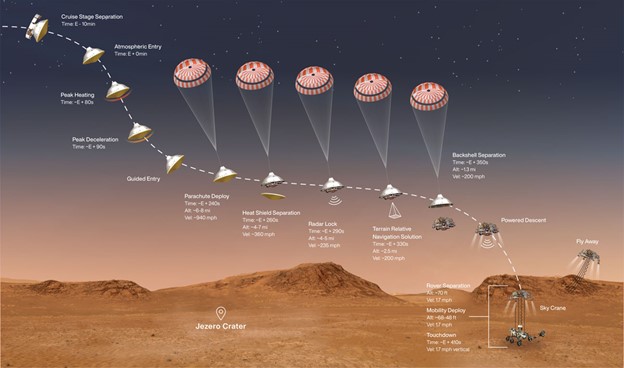 If you want to see a simulation of the landing visit Perseverance Simulation. 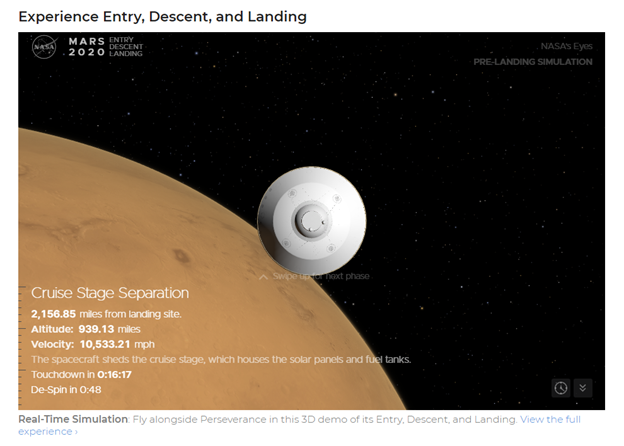 Perseverance will attempt to land in the Jezero Crater, which contains the remains of an ancient river delta. The image below of the crater was taken by the High Resolution Stereo Camera aboard the ESA (European Space Agency) Mars Express Orbiter. 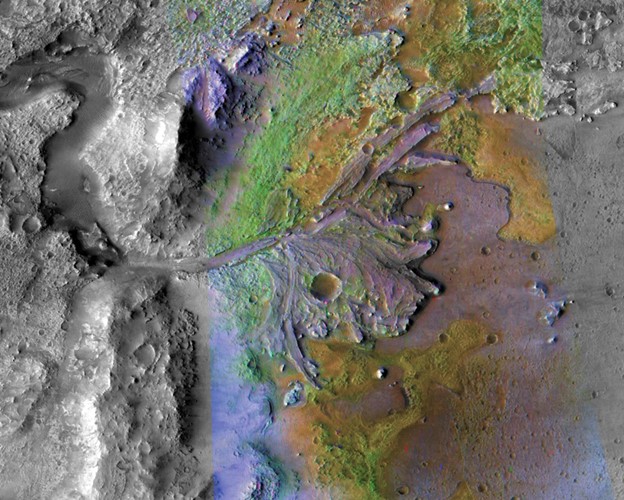 At our local astronomy group (Southern Oregon Skywatchers) virtual meeting last month we featured a presentation (sponsored by North Medford High School and ScienceWorks museum) by two JPL scientists about the NASA Mars rovers. It was a fascinating presentation and a video of it can be found here: Mars Rover JPL Presentation.

The New York Times published an excellent article last year about space missions that have explored our Solar System including Mars. 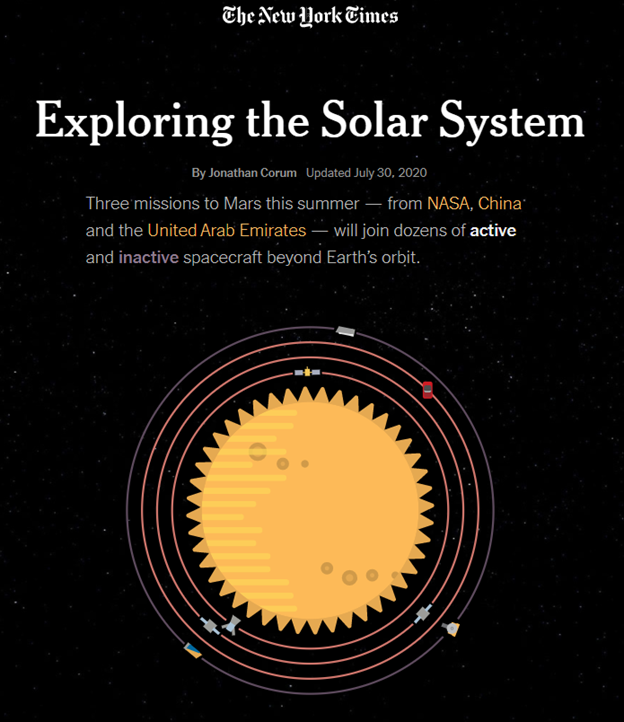 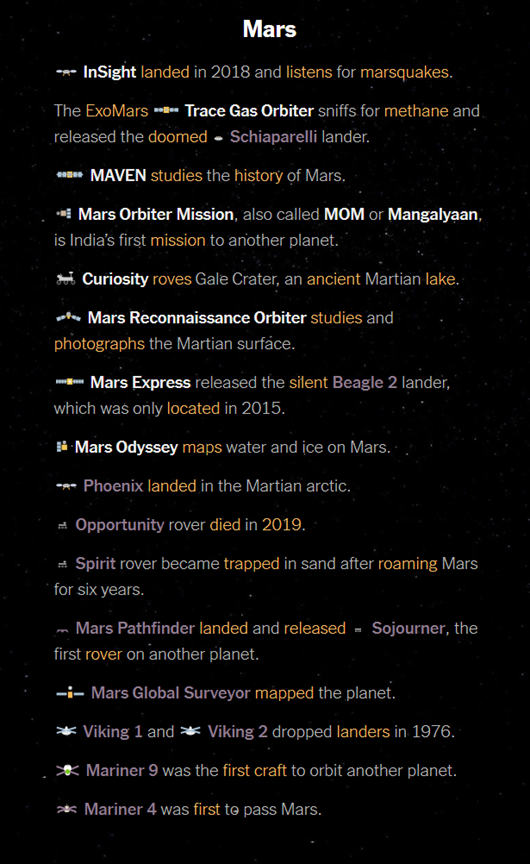 As you can see from the above list, Mars is a popular destination.

I mentioned in the introduction there are two other Mars missions that will arrive at the planet in February.

The EMM Hope Orbiter is designed to orbit Mars and study the dynamics of the Martian atmosphere. It will use three instruments aboard the spacecraft to examine the daily and seasonal weather events (such as dust storms) in the lower and middle atmosphere and determine how the weather varies in different regions of the planet. It will also attempt to find out how the escape of atmospheric particles from the gravity of Mars affect its climate. Visit Emirates Mission for more information about the mission.

This spacecraft from China’s National Space Administration (CNSA) will arrive at Mars on February 10 and enter orbit around the planet. It consists of an orbiter, lander, and rover. The objectives of the mission are to search for evidence of both current and past life, and to assess the planet's environment. On arrival, the orbiter will begin imaging the main candidate landing site within the Utopia Planitia impact basin with the objective of landing the rover sometime in May. If the rover lands on Mars successfully it will make China only the second country to do so. For more information, see Planetary Society Tianwen-1.

Build Your Own Mars Rover

If you want to build your own cardboard rover, NASA JPL has an easy project your can do at home, see JPL Cardboard Rover. 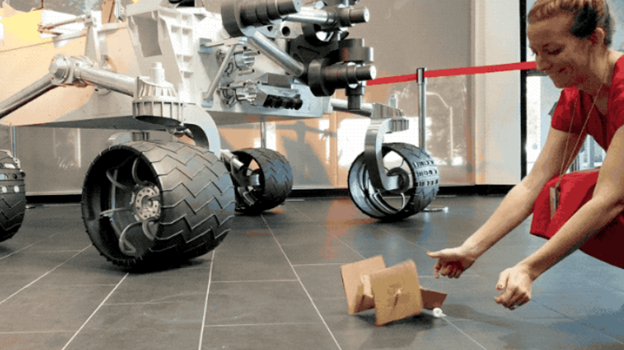 February promises to be an exciting month for the space program and Mars. See you next month.